This guide documents the changes required to migrate a code base which uses OTB v7 to use OTB v8.

OSSIM is used for geometric sensor modelling and metadata parsing. It has been a dependency of the OTB since it's beginning. Then adapter classes have been added, to hide OSSIM headers from OTB public API. With the version 8 of OTB, it is time to remove this dependency, whose development cycle is difficult to follow. Until OTB v7, only a small portion of OSSIM was used anyway.

How OSSIM was used until OTB v7

OSSIM comes with a complete framework to read and write metadata from image files. It is able to read the metadata and store them in an object callel KeywordList. The OTB is then in charge of channeling this object through the processing pipeline so every filter can access them. When one needs to output an image file, OSSIM takes the KeywordList object and write it's content to the file. OSSIM use the GEOM file format for the metadata.

OSSIM also comes with a framework for sensor modelling. It includes a factory that instantiate the correct model according the to content of the metadata KeywordList. It is the able to perform forward and invers transform. Depending on the sensor, the model will be based on RPCs, or other sensor specific model.

How we replaced OSSIM in OTB v8

The two main work for this version 8 have been:

A new DEM Handler was also developed, based on what GDAL proposes.

The keys of the maps are described in the file otbMetaDataKey. This file also defines the time object.

After, those objects are not used anymore for the metadata, replaced by the ImageMetadata class.

One can simply access the data in the ImageMetadata using its public functions:

There is a new workflow to replace the current function ReadGeometryFromImage(): 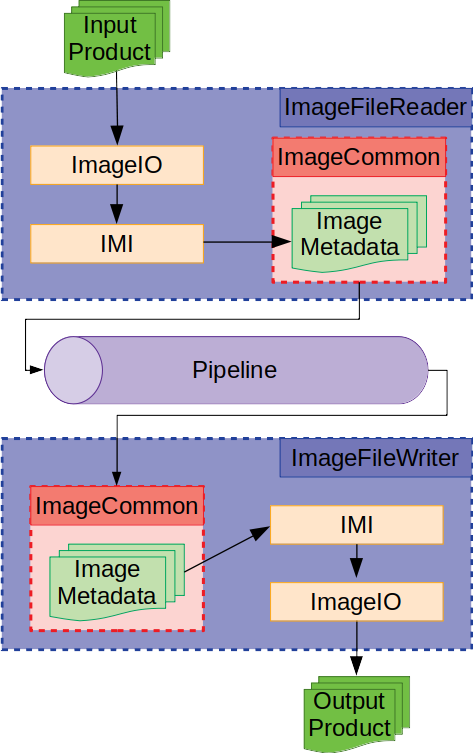 Before the refactoring, otb::DEMHandler class was an adapter class for OSSIM DEMs. It provided an API to retrieve height from DEM and/or geoid using OSSIM, and was used to set up DEM and geoids to be used by OSSIM internally (which is used in OSSIM RPCs for example).

The new approach is based on RasterIO from GDAL. A 2x2 window is extracted around the point of interest, and the height, above ellipsoid or above mean sea level. The following methods are provided:

Several DEM tiles can be provided at the same time, using the OpenDEMDirectory method. All raster from the input directory will be opened by GDAL. A mosaic of all DEM tiles is then created as a virtual dataset (vrt).

Geoid are managed with the GDALOpenVerticalShiftGrid and GDALApplyVerticalShiftGrid function from GDAL API. The former opens a 1D raster grid as a GDAL Datasource, and the latter creates a new datasource from the raster grid (geoid) and a raster (the DEM). Vertical datums (shifts from the reference ellipsoid) are applied on the fly.

All raster that can be opened by gdal can be used as a geoid. In Ossim it was common to use the egm96.grd file as geoid, this file cannot be opened by GDAL. However it is still possible to use it by using the following egm96.grd.hdr file :

With this file attached, GDAL will be able to read the egm96.grd file as a ENVI dataset

We introduced a slight change in the DEMHandler manipulation. Before, we would manipulate a smart pointer:

After, we manipulate the handle to the singletron:

The class otb::SensorTransformBase is the new base class for sensor models. It inherits from otb::Transform, which inherits from itk::Transform. It is templated over the data type, and input and output dimentions. All sensor model classes should inherit from it, and implement the methods:

The RPC model is stored in the otb::ImageMetadata object, using the key MDGeom::RPC. The classes otb::RPCForwardTransform and otb::RPCInverseTransform inherit from otb::RPCTransformBase and are used to perform forward and inverse transformation using this model.

The abstract class otb::RPCTransformBase contains the implementation of the SetMetadataModel method, which receives the RPC description from the otb::ImageMetadata and instantiates an otb::GDALRPCTransformer.

The SAR model works on the same pattern than the RPC model.

Before, the sensor model relying on OSSIM would be instantiated like this:

After, the new sensor model framework uses a simple factory that needs a pointer to the ImageMetadata object, and the transform direction: