What changes will be made and why they would make a better Orfeo ToolBox?

The main idea is to remove OSSIM from OTB, in order to reduce the dependency risk, and also to refactor some parts of the library.

OSSIM is used for geometric sensor modelling and metadata parsing. It has been used for that since the beginning of the OTB. Then adapter classes have been added, to hide OSSIM headers from OTB public API. Now, it is time to plan the removal of this dependency, whose development cycle is difficult to follow. In the current state, only a small portion of OSSIM is used anyway.

This work can be performed in several steps:

Here are some details and propositions regarding the implementation.

This is a list of classes that could be removed at the beginning of the refactoring without much trouble:

Currently, metadata is parsed from each child class of ossimSensorModel. This metadata is then exported into an ImageKeywordlist. On the other hand, the otbXXXImageMetadataInterface is designed to expose this metadata in a generic way. It would make sense to move the metadata-parsing code from ossimSensorModels into otbXXXImageMetadataInterface ("IMI"), and have a single class that represents a sensor metadata.

I have been thinking about a more generic way to parse metadata. In the end, there are always corner cases where the metadata is read from some file and then transformed before being recorded into the ImageKeywordlist. I propose the following workflow to replace the current function ReadGeometryFromImage():

The following diagram sums up the different steps. 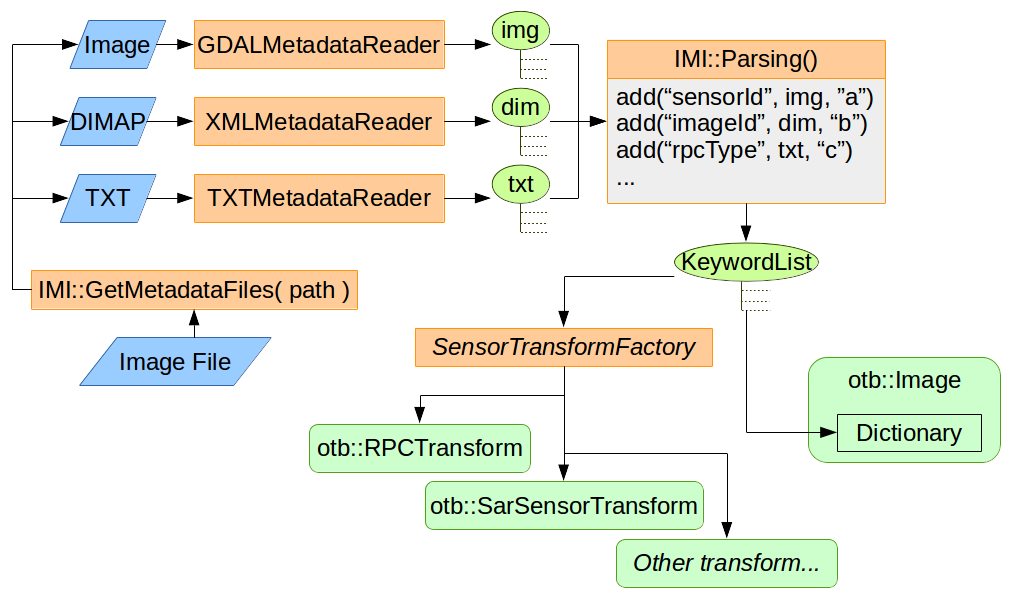 In the case of a single image file with a geom, the steps 1, 2 and 3 are not needed, the geom is directly injected into the ImageKeywordlist.

In a nutshell, the IMI classes will be in charge of identifying the correct sensor and parsing all the relevant metadata. The SensorTransform classes will operate various geometric transforms, configured from an ImageKeywordList.

The role of IMI classes can also be extended, for instance give the list of metadata keys that carry per-band values. A concatenate file will then be able to gather these metadata together.

Note from RKH: use RapidXML instead of TinyXML.

We move the code related to geometric transforms into several generic SensorTransforms. For now we can expect:

Like with ossimSensorModel, we can implement tuning parameters in otb::SensorModelBase to reproduce the ossimAdjustableParameterInterface. The adjustment parameters are often used to configure a residual affine transform that is composed with the geometric model.

Actions: there is nothing really equivalent in GDAL. If we go for a custom development, we could also plan a different use of this DEM:

With a grid-based approach, the DEMHandler would rather return an image pointer (probably the output of a pipeline) than a single float. After a quick review of the calls to itk::Transform::TransformPoint(), it seems difficult to avoid the point-based service in the DEMHandler.

The best example is the computation of an ortho extent. This requires (at least) 4 forward transforms for each image corner. Assuming a RPC model, this sensor-to-ground transform uses an iterative approach, because the RPC gives the transform from ground to sensor. The DEMHandler will have to supply several elevations for each image corner and the (x,y) coordinates of theses elevations can't be easily predicted. Also, since the corners may represent a large extent on the ground, it is risky to assume that the whole region can be buffered.

Then, there is also the question of the input to the DEMHandler. At the moment, we give a directory and an (optional) path to a geoid file. Giving a path to a DEM file could be easier for the users, but keeping the existing behaviour would ensure nothing is broken on user side. Since a DEM is often composed of several tiles, the VRT solution seems the best to gather the tiles in a single entry point. We can even create it in-memory to deal with backward compatibility.

The solution proposed is to work with 3 classes:

This is the proposed skeleton for the future DEMHandler class:

The GDALDEMReader class will be a composite filter, containing the following boxes:

This reader will be used during the point-based calls: a small patch of DEM will be extracted around the requested location. During grid-based calls, it will return an otb::Image connected to a pipeline.

The DEMResampler can be really simple at the start. The only mandatory feature to be implemented is the interpolation on a different grid (using the same SRS). Indeed, this is how the point-based method GetHeight() will interpolate the correct elevation. Later on, we can improve it to support:

It could be a nice feature in the long term.

We will probably need to modify the GDAL_CACHE_SIZE variable for better performances. Also, this cache size should be subtracted from our RAM parameter.

Who will be developing the proposed changes?